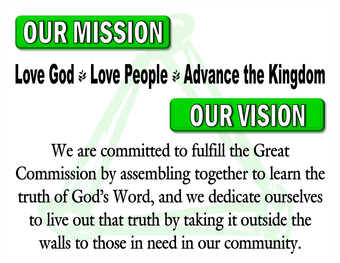 What We Believe​
The Holy Bible is the inspired Word of God and is the basis for our core beliefs.  The church subscribes to the doctrinal statements of the “The 2000 Baptist Faith and Message” as adopted by the Southern Baptist Convention in 2000.
CELEBRATING 70 YEARS, May 4, 2022! 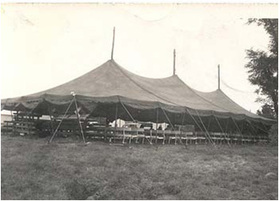 Established May 4, 1952
The need of a mission was conceived in the spiritually alert minds of the pastor and membership of First Baptist Church, Jacksboro, Texas. Live Oak Baptist Church has recognized the “Great Faithfulness of the Lord” as He has given “Victory in Jesus” in touching many people in and around Jack County.  It was the overwhelming attendance at an open-air revival in the summer of 1949, led by Rev. A.R. Bilberry (then pastor of First Baptist Church) that revealed provision should be made to accommodate another Southern Baptist congregation in Jacksboro.
With the coming of cold weather in 1950, an abandoned service station was donated.  This location on the Old Wichita Highway just off Live Oak Street became the meeting place first known as Live Oak Mission Chapel, with renovated and make-shift facilities.     The mission congregation grew in members and strength, such that on May 4, 1952, the Chapel became Live Oak Baptist Church with 60 charter members.  In August of that year, the church affiliated with the Jack County Baptist Association and with the Texas and Southern Baptist Conventions.
Construction on the present original building started in October 1952, and the congregation began to meet in it early in 1953, before the education section was completed. Much of the labor was donated, and Texas State Missions made a supportive donation toward building expenses.
Time and space do not permit the mention of many of our history-making experiences in the life of Live Oak Baptist Church or the names of so many deserving and responsible members, but the characteristic Live Oak folks are most proud of is the outstanding family spirit manifested through love and faithfulness, which people feel has made the church what it is today.
And thus, Live Oak Baptist Church presses forward in the ministry of a New Testament church made acceptable in God’s Holy Word, ever thanking the Heavenly Father through Jesus Christ, Savior and Lord, for all the victorious years of ministry and fellowship!